Weligama was primarily a fishing village. The deep widely curved arc of bay is lined by a sandy beach where you can see the big and small fishing-boats and bulky catamarans. More fishing boats bob in the calm turquoise waters of Weligama’s calm western end of the beach, close to new pier and fish market. The main road linking Galle and Matara fringes the coast here. On both side of the road are a lot of restaurants, cafes, hostels, guesthouses and hotels. On the beach itself you can find places for surf-lessons, rental surfboards and shops for surf outfits.

Weligama town is located inland in direction to the central bus- and railway station. You can find all kinds of shops, super-markets, banks and postoffice.

Have a walk or go by scooter or tuk tuk for shopping and sightseeing in Weligama. Interesting places are famous statue of Kushtaraja nearby the railway station, the island of Taprobane and a lot of old and new buddhist and muslim temples. On tuesday and friday you can have a walk on the local market place, some impression you can see on the photos below. Get you own asian inspirations. On the coast road you can find fishstands with fresh fish and seafood. Only some kilometres outside Weligama town you can visit a batic factory and in direction to Galle a silk factory. Of course at both places there is a shop to buy all that colourfull clothings. Look for the photos below !

Weligama is located on the south coast of Sri Lanka, about 2 hours from Colombo and 45 minutes from Galle or Matara. Colombo-airport is 151-kilometres away, via the Southern Expressway it is a 2.5-hour drive. We can arrange transfers from the airport for you and you can get around locally in a tuk tuk, by bus, rent a bicycle or scooter or just walk.

„Top of the Hill“ Guesthouse & Villas and Restaurant is situated in Weligama-Kapparatota, two kilometres west of Weligama’s main beach, a very good place for surfers and beach lovers.. Only a 5-minutes walk from our guesthouse you will find „Junglebeach“ for swimming, snorkeling and surfing. The sandy beaches of the Indian Ocean are offering swimming and surfing in season, and the offshore coral reefs are excellent for diving and snorkeling. Scuba/ PADI-Diving Center nearby our guesthouse.

For activities and interesting places nearby Weligama please look below to the text and photos. When you stay at our guesthouse, please ask us how to organise activities and roundtrips, we would  like very much to help you. 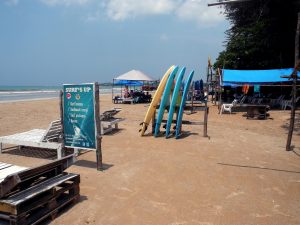 Weligama is one of Sri Lanka’s very best surfing spots, and is good to learn as the main bay in Weligama is sandy and safe for beginners. There are a lot of surfing operators along the beach. If you’re an experienced surfer you can surf at other popular local surfing beaches like „Junglebeach“ nearby our guesthouse and other places like Ahangama, Midigama, Mirissa.

The reefs off our coastline offer a variety of corals and a colourful variety of reef fish. You can discover them on your own or on a guided snorkeling tour, offered by PADI-diving centre. Snorkeling is possible at „Junglebeach“ bay, and nearby Weligama fishing harbour.

For diving-lessons and -tours there are 2 PADI diving centres nearby our guesthouse. There are a number of dive sites in the area and divers can hire equipment and join their dive excursions for reef, rock or shipwreck diving places. The diving season typically runs from November until April.

You can body board at „Junglebeach“ and rent boards from the Cape Weligama Beach Club who also offer guided body boarding tours. Body boarding is also possible in Weligama.

Possible at our „Junglebeach“, you can rent stand-up-paddleboards at the Cape Weligama Beach Club.

The best way to appreciate the region just a few kilometres inland is on two wheels, on a bicycle ride that takes you along quiet back lanes, beside paddy fields, lotus-strewn lakes, villages and temples.

Southern Sri Lanka offers some of the world’s best whale sightings potential. The seas off our coastline are home to a resident pod of blue whales. Brydes whales Orcas and spinner dolphins are also to be seen. Whale watching trips are mostly starting at Mirissa Harbour, only a 10 minute drive away. Whale watching is best from November to April.

Nearby places to be visited on halfday- or day-trips

Weligama beach / One of the best surfing spots in Sri Lanka. The bay has a completely sandy bottom and is a great place to learn surfing safely. Sometimes bigger swells, specially at „Jungle Beach“ nearby our guesthouse, which can challenge even very good surfers. Ocean may be rough off season.

Unawatuna beach / Nice sandy beach nearby Galle with a lot of hotels, bars and restaurants.

Turtle Hatchery / Hatchery where turtles are hosted; turtle eggs are preserved until they hatch, at which point small turtles are being released into the sea.

Sinharaja Rainforest / Largest rainy forest in Sri Lanka which UNESCO recognized as a world heritage. You will find a number of water falls and unique species of insects, reptiles, birds and other animals.

Udawalawe National Park / It is the home for a great number of elephants. There are living more than 400 elephants in a jungle area including big lake. You can see big herds of adult and baby elephants feeding or bathing. You can also see birds, water buffalos, deers, monkeys and other kinds of animals.

Koggala Lake boat safari / Best time for a trip on Koggala lake is late afternoon. Whatching many birds and reptiles including fish feeding and visiting Cinnamon and Temple islands. Nearby there is a spice garden.

Stilt Fishing in Ahangama / Fishermen perched on sticks planted in the sea fishing with a rod and line. Practiced only in this region.

Snake Farm nearby Akuressa / Private snake farm holding a lot of different kind of Sri Lankan non-poisonous and poisonous snakes and some other animals.

Matara, Dondra and Dikwella Temples / On the way from Weligama to the south of the island you can visit Matara, a big city very good for shopping and sight-seeing. Have a look to the fort and large temples. On the road to Tangalle and Mulkirigala you will pass the southern point of Sri Lanka, Dondra lighthouse. Have a stop to enjoy this special place. Behind Dondra you will pass the 50 meter high Buddha-statue of the Dikwella temple.

Galle Fort, listed as UNESCO World Heritage site since 1988 / Galle’s Fort was first established on a peninsula by the Portuguese, after about 150 years conquered by the Dutch and another 150 years later by the British empire. The fort is best place to explore on foot, maybe with a guide. Along its colonial atmospheric streets and walls you will find churches, town-houses, restaurants, cafes and shops.  Best time for a visit is early morningtime and late afternoon,when the heat of the day is a little less.